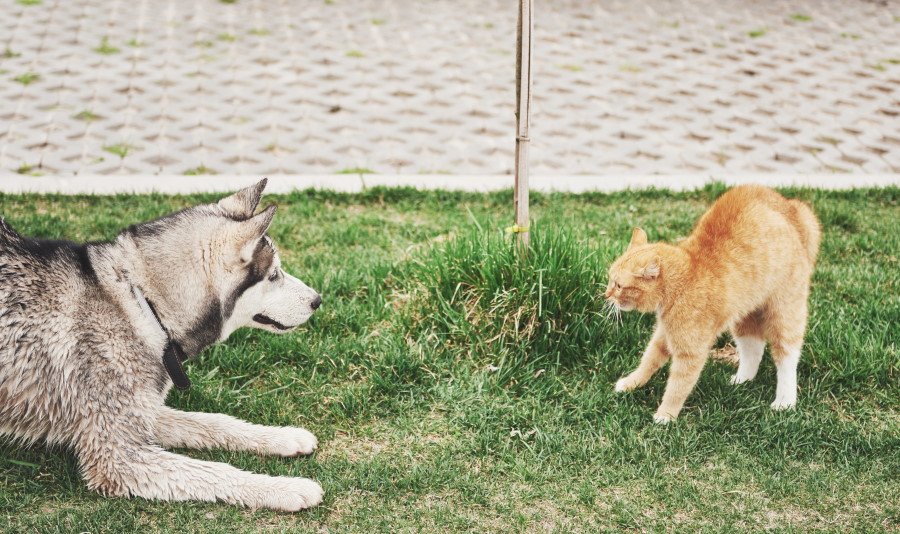 Cats are territorial creatures and will tolerate new animals in their space in varying degrees, so when it comes to introducing cats to dogs, be very careful.

First and foremost, do some research on both the breeds of the dog and cats and ensure they are compatible. Some highly aggressive hunting breeds or other characteristics in a dog may make them a bad match to try and socialize with a cat.

Don’t forget to consider size and weight, as this could end up being a life-threatening situation if not planned and executed correctly. A large dog, when hissed, scratched, or on the receiving end of cat aggression, may lash out in a manner that could unintentionally cause injury to the feline. Due to the size differences, it’s possible for the dog to hurt your cat without intentionally meaning to can occur.

For this and so many other reasons, there are some good guidelines for testing the water on it a cat and dog will be able to co-exist peacefully in your home.

It is a bad idea to introduce your feline to multiple dogs at one time. This can cause them to retreat, get aggressive and immediately go on the defensive. As a good rule of thumb, ensure that you have a person available to shelter, control, and interact with each animal when introducing a cat and dog.

In addition, be sure you do not do introductions in confined spaces that can hurt the human handlers or the individual animals, should they bolt or start thrashing. Finally, give all the animals quick exit strategies if things get too tense back to their separate spaces.

READ THIS:  Introducing Cats to Other Cats

Each animal should be introduced into the household in their own space. For example, both cats and dogs that have a safe place (bed, crate, etc.), their own food, and such will be that much less likely to challenge another animal for rights to shared items.

This space can also be a place of safety during initial meetings should aggression or stress occur in either animal being introduced.

After allowing both feline and dog to get acclimated to their own space, allow the first introduction through a closed door. This allows them to smell the other, hear the scratching the like without direct bodily confrontation.

As they calm and settle in with the other’s scents, then a first calm introduction with just a couple of people in the room able to restrain each animal should that be needed can occur.

Be sure that your dog already understands and will respond to commands such as sit, down, come, and such. This will allow better control in doing introductions with a feline.

Dogs and cats should both be observed during the initial introductions for body language. Is the hair going up on the back of the dog’s neck, the cat hissing and backing away, and the like? These signs should cause you to keep the meeting brief and allow them to retreat to their own spaces to wind down before the meeting has a chance to escalate. You know your pets best, so stay engaged with these early interactions.

Remember, dogs can kill cats even while playing, so attentiveness to their body language and how they interact could become a life and death situation.

READ THIS:  7 Foods & Plants That Are Poisonous for Cats

Age matters, especially for kittens and the elderly felines you may be introducing to dogs. For instance, while young kittens may not be afraid of dogs as older cats might, they are more fragile. Kittens may be more willing to engage with dogs, but a high-energy or just larger canine could end up hurting them unintentionally.

Cats that have been raised as the only fur baby in the home for years may be extraterritorial make introductions harder. Finally, older cats should be in good physical condition and be cleared of any illness or other concerns before introducing them to dogs.

This will ensure they both can’t be hurt and won’t show other outward personality concerns when introduced to dogs. Age will play a part in introducing your cat and dog fur babies and should be considered well before the first introduction happens.

In conclusion, when introducing dogs and cats, slow, steady, and prepared should be the words to keep in mind. Allow each animal their own space, with bedding, food, and toys. Introductions between healthy animals should include handlers that can manage any behaviors immediately.

Watch body language as the first introductions are made, and react calmly but appropriately. Use positive reinforcements for both, and allow separation when anxiety or other behaviors warrant it.

Hopefully, your canine and feline friends will soon co-exist in perfect harmony with patience, perseverance, and some good preparation.

READ THIS:  What Are Polydactyl Cats?