How Can I Tell if My Cat Has Diabetes? 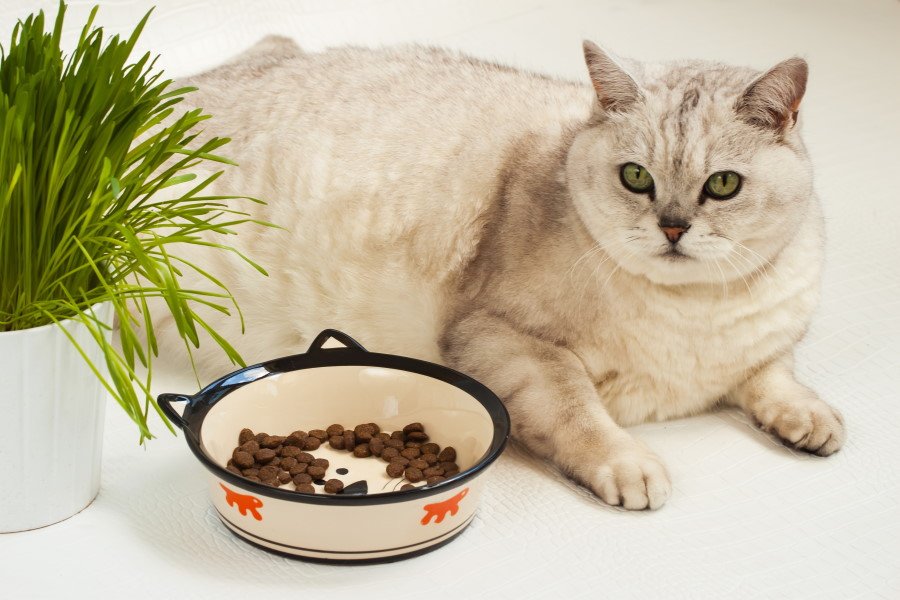 Most cat owners are for the most part unaware that diabetes can occur in cats, especially in older ones…so you’re likely wondering, how can I tell if my cat has diabetes?

We all know about fleas, ticks, feline leukemia, and of course, all those digestive and personality issues generally. But until a cat is diagnosed with diabetes, it usually comes as a shock that our ‘purrfect’ feline is diabetic.

Diabetes in any mammal is technically known as Diabetes Mellitus and does have three significant levels. Type I is caused by a non-insulin-producing pancreas, while Type II is a pancreas that does not produce enough insulin to convert sugars in the body, and Type III is the mildest form.

All are related to the non-conversion of sugars by the pancreas due to a lack of beta cells. That is about all the in-depth information we will get into as we know you want to know the signs and symptoms!

Diabetes in Cats is Not Rare

It is the second most common type of chronic condition in felines. It is more common in middle-aged to older seniors, and most common in males. The common signs to look for are a loss of weight, unrequited thirst, and frequent urination.

How Can I Tell if My Cat Has Diabetes?

Since most cats do not drink much but get their fluids from wet foods, thirstiness is not necessarily noticed by owners. An outside cat can also not exhibit excessive urination as they will urinate more times outside. Since diabetes in cats goes undetected in cats quite a lot the first thing pet parents notice is that their cat is becoming lethargic.

As diabetes goes untreated, cats develop ketoacidosis, which signifies a shutdown of their kidneys and dehydration. Once this happens, it is imperative to see a vet ASAP, as coma and even death can occur. If an otherwise healthy cat, no matter what the age, starts sleeping more and playing less, diabetes is suspected, especially in an overweight cat. As with humans, being overweight increases the chances of developing diabetes.

READ THIS:  How Can You Prevent Cat Fleas or Parasites?

So How Is Feline Diabetes Diagnosed?

Veterinarians must diagnose diabetes via a blood test and urine analysis. If your cat has stopped eating and drinking altogether, then hospitalization might be needed to rehydrate them.

Even if your cat has had its annual physical chances are that if even an additional three pounds is gained in a cat, in a matter of months, it does increase their chances of having diabetes. A severely diabetic cat is very ill, and a vet will move rapidly to rehydrate them and establish whether any internal organ damage such as the kidneys have been impacted.

IV insulin is generally given also to regulate the glucose immediately, and urinary tract infections are prominent in diabetic cats, so urine analysis screening also is used to rule out complications.

What are Treatment Options for Diabetic Cats?

If your ‘pussface’ is overweight, then any good vet will immediately recommend a diet low in carbohydrates with moderate portions. We know your cat will not take well to a reduction in food, but diabetes is easier to control with a weight reduction.

Depending upon the severity of diabetes, either Type I, Type II, or Type III, a vet will recommend regular insulin injections throughout the day with blood test monitoring, a combination of insulin and diet changes, or simply diet changes. Now we all know that giving insulin to cats via injection is almost impossible. The insulin injections should occur at least twice a day until the glucose curve is adjusted.

However, the blood monitoring is done via the vet’s lab, so this is quite costly, and cats do not enjoy any of it. Insulin injections are to be given after a cat has eaten, so self-feeding is out, and this makes for a cranky cat even before you attempt to inject them!

Can I Control the Diabetes by Diet Alone? 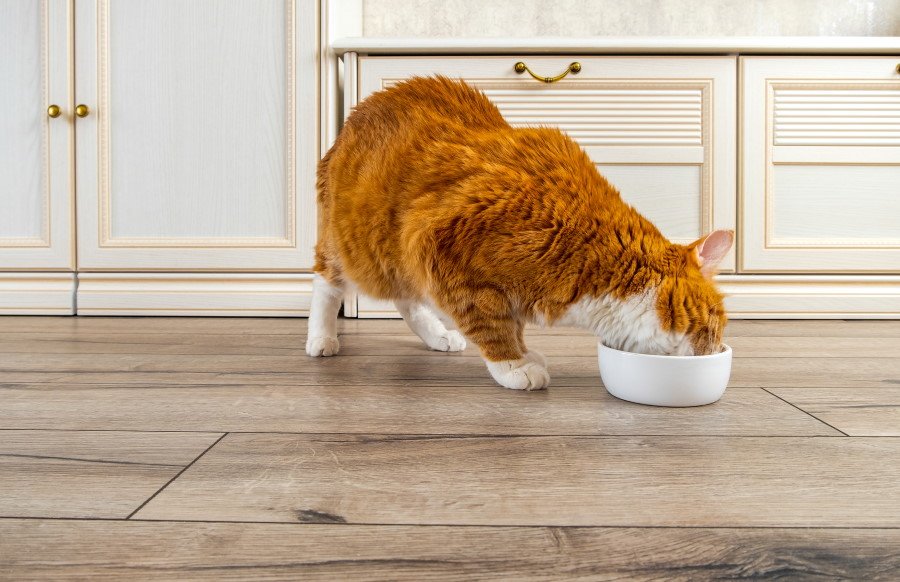 An adult large ginger tabby cat eats food from its bowl in a room with a natural wood floor and light-colored furniture. Horizontal orientation, selective focus.

We do not like to give medical advice, but we have encountered individuals that had severely diabetic cats, who were hospitalized, and when the injections could not be given at home, they were advised to humanely euthanize their precious furball.

One named Colin was a feral whose owner discovered that he was diabetic shortly after adopting him. A rather large and somewhat onerous cat personality, he would have nothing to do with the injections although he had severe Type I diabetes. Since he was a feral, diabetes can also be created by chemical changes to the pancreas, and he possibly had poor nutrition and eaten varied substances while being feral.

Giving Colin injections only resulted in his pet parent stabbing herself most of the time and being clawed and bitten to boot after chasing him around for hours each day. She took it upon herself to research after her vet advised that he should be euthanized as she could not give up.

What is the Best Type of Diet to Try?

Colin’s owner did spend lots of time researching and buying all types of foods to try and remedy his diabetes to the point where it was not life-threatening. Diabetes is not curable, no matter what the type, Carbohydrate’s cause blood sugar spikes, so a low carb or no carb diet is what Colin’s owner sought.

There are veterinary-approved diabetic cat foods in both wet and dry varieties which have little to no carbs. These are expensive, however, and anyone that owns a diabetic cat must be committed to the costs involved in feeding properly also. Cats are also picky, so the very best diabetic foods approved by vets were not always to Colin’s liking, and this owner shopped around for a good dry low carb food, but then supplemented it with a raw food diet, to provide the moisture.

Being a feral previously, Colin loved the raw diet, and it proved cheaper than buying prepared low-carb vet-approved wet diabetic foods. Raw is pure protein so there is nothing left to chance. Also, to prevent dehydration, Colin’s owner did have his drink three times a day via a syringe she used. He was not that happy with that either, but it was much easier than the insulin injections!

Some Research on Keto Diets Exists

Keto, of course, is low in carbs so some success would be expected. However, the different brands that are chosen if using the Keto approach to regulation of blood glucose through a certain brand need to be investigated thoroughly. While there are a ton of ads online and offline for processed brands of Keto diet foods for cats, the claims that it can absolutely control glucose in a cat with severe diabetes is to be taken worth a grain of salt perhaps.

READ THIS:  The Top 3 Absolutely No Cost DIY Cat Beds and Hammocks

A Keto diet is high fat, medium protein, and low carb. Not no carb, but low carb, and only medium protein. Since cats who have diabetes are generally overweight, there is a propensity also to heart disease so is high-fat good? That is a question worth pondering, and again, other processed foods do exist, and there is always the option of feeding a raw diet and having total control.

In a cat with diabetes, especially extreme diabetes that needs close monitoring, just picking a Keto brand of food and expecting a miracle might not be the wisest choice.

What Is the Takeaway Here on Feline Diabetes?

Although you should always try and follow a veterinarians’ advice, with cats it sometimes is not practical, especially in extreme cases of Type I diabetes. Colin, the cat mentioned above here, was not old by any means, only three when he developed diabetes.

Although the vet predicted he would not live to be four years old, by taking matters into her own hands, the owner, with diet, a bit of sternness, (Colin no longer got table scraps or could feed at will), Colin lived to be 15 years old at which time his heart failed and he passed quietly in his sleep. But his owner was dedicated for over a decade to feeding him what she thought was best and being diligent about everything, including not leaving food scraps out on the table, as he was also a notorious counter surfer. She not only had to retrain Colin but herself and her whole family.

However, the happy ending did occur, so sometimes cat ‘moms’ do know best and if you find yourself with a diabetic cat, it is good to look into all the options of treatment. Also, be sure to keep an eye out for the telltale signs of eating and drinking too much, and lethargy, and do not delay taking any cat with these symptoms to a vet immediately.